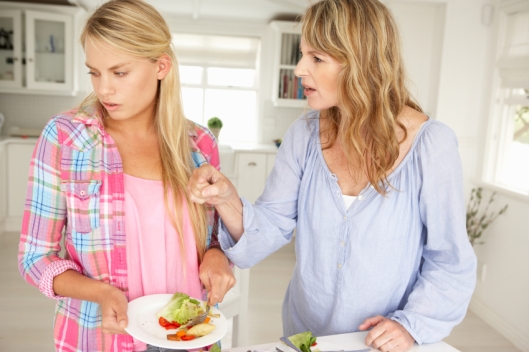 In my line of work, I see a lot of family conflict and almost without exception, parents AND teens seem embarrassed to admit to arguing.  But if we stop to think about it, wherever two or more people are in relationship, conflict is inevitable. After all, a teen’s job is to explore the world, to find the “limits.” A parent’s job is to promote safety and decency. Sooner or later, those two paths are on a collision course. Let’s consider what makes for good relationships THROUGH conflict.

Let’s begin by thinking about CONTROL, perhaps the reason that conflict rears its ugly head most commonly in adolescence. Up until teen years, kids are often willing to go along with parental requests/requirements and, more importantly, unable to NOT go along. With the increasing capabilities (intellectual and physical), kids see a new option: being independent. Do we believe that longing to be independent is healthy? Natural? Hoped-for by both parents and teens? (Would you want your teen to say, “By golly, Mom, Dad, you’re right! I should ALWAYS ask you what to do. I can’t possibly figure this out for myself.”?) Let’s agree that by the end of adolescence our goal and our kid’s goal is: self-control, confidence, and competence. Our job is to hand over more and more control to them as they demonstrate their increasing ability to handle it. It’s helpful to consider too: what level of perfection do we expect them to demonstrate? Do we expect that every decision will be perfect, timely, wise? As kids assume control of their lives, there is much to learn…and mistakes to be made while they figure out managing CONTROL…and while we figure out letting go of control.

At your house, what are the options for disagreeing with parents? Let’s say a kid wants to wear an outfit which doesn’t get approval; or maybe clothes end up on the floor instead of the hamper; or a friend seems a bit sketchy to parents who’d like to forbid the friendship. What options does a teen have?

Which options are most likely to lead to our goal of a young adult with self-control, confidence and competence?

Research discussed in Po Bronson’s book, Nurture Shock, offers some relevant insight. The research was intended to explore why kids lie to their parents, how common lying is, about what topics. But the studies took an unexpected turn when researchers accidentally found that teens who reported lying to their parents the LEAST also reported fighting with their parents the MOST. (Too bad because what most of us parents want is kids who tow the line, agreeing AND telling the truth! Is that too much to ask? Apparently!) Researchers uncovered the fact that most kids would like to live open lives with their parents; but they would also like at least some of what they want to do. Kids who tell the truth end up wrangling with their parents until a compromise can be reached, maybe a little less than either parent or teen would like but workable and honest. It sounds like, “Let’s make a deal.”

Want to try some “homework?” If so, notice what you and your kids most frequently argue about. See if you can determine which option (above) happens at your house. Is there an additional option? If you find yourselves in  “Let’s make a deal” situations, how do you and how does your teen respond? When a conflict situation goes well, what dynamics made that happen? How can you do that more?

How would your thoughts and actions about disagreements change if you saw each one as a step toward turning over control/learning to manage self-control?