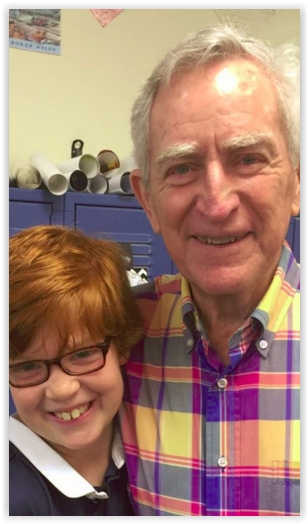 I know that I have written about this father/grandfather/great grandfather before. But it’s is a story I love so much I want to share it again. I might not get the details exactly right but I was told the story by his later-in-life-second-marriage-step-daughter (Amy) who adores him, Jerry Gilmore.

Jerry didn’t marry Amy’s mom until after the death of both of their spouses so Jerry came into Amy’s family’s life well into it! Her children grew up loving Jerry and he was a presence NONE could overlook: fun, lively, kind-hearted, civic-minded, always ready for charity, or for acts of service. In so many ways, Jerry was a fine example to Amy’s three growing boys.

When it came time to celebrate one of Jerry’s BIG birthdays, the boys and Amy puzzled over what they could possibly get as a gift…the man had everything he could want. One day, one of Amy’s boys offered the PERFECT gift. The boys called to make a date for Jerry to come on a special birthday outing with them. Then the family hustled off to Target, purchasing toothbrushes, blankets, socks, soap, combs, etc. They purchased birthday cupcakes with special decorations and juice drinks to go along.

When the day came to pick Jerry up for the outing, the boys had about twenty bags prepared in the back of their van, bags of survival essentials for homeless folks. Inviting Jerry to take the front passenger seat, the family headed out to roadsides near downtown Dallas; to under bridges where they knew homeless people camped; to street corners where folks often panhandled. As they approached each stop, Jerry rolled down his window, explained to the folks that is was his 80th birthday . . . his grandsons wanted the folks on the street to join the celebration. Cupcakes, juice drinks, the prepared bags of gifts were given to each person they met. Stop after stop, after stop, after stop. Certainly the street folks were blessed. But even more so, the boys and their grandfather (to say nothing of their mom and all of us who learned about the story).