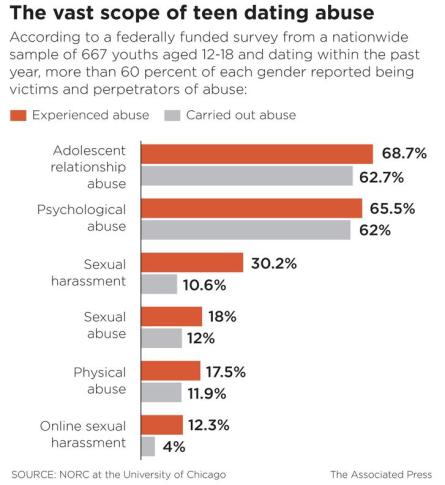 A big “thanks” to The Dallas Morning News (article entitled, “Dating rife with abuse, teens say,” October 24, 2014) and to the Associated Press for running this important news item. As a person who has talked with teens about dating, sex and relationships for more than forty years, I can tell you, things ARE changing. These numbers only report the tip of the iceberg.

First of all, the researchers found no differences in kids’ responses based on income, ethnicity, or geographic location. In other words, this is everyone’s problem. Kids are doing this all over the country. This leads a parent to ask, “Where is this coming from, this idea of sexual and romantic meanness?”

Secondly, kids think of teasing and name-calling as “normal” in relationships. Yet experts in abusive relationships explain that abuse begins with such “innocent” behaviors. Girls report to me that if they decline a boy’s advances, much less if they act insulted by an unwanted grope, the boy is likely to announce to all (often via Facebook or Instagram) that she is “frigid” or a “lesbo.” Likewise, if a guy turns down her advances, he can be instantly labeled as “gay.” The report is stunning in that it suggests that about 2/3 of teens have been both recipients and perpetrators of abuse.

What can a parent do?

My answer is always, “Talk about it.”

This is a difficult topic to broach but when one realizes that about 2/3 of teens will encounter relationship abuse (whether in their relationships or with a friend’s), we must begin to lay a path for communication. Of course, a perfect antidote is to discuss and model what loving, kind, fun relationships are. Don’t forget to point out the ones you and your kids see in young adults they know: cousins, family friends, even young teachers or coaches at school. Good love is still around; we may just have to look for it.

As ever, I welcome your responses.