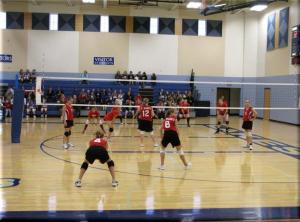 So the story is one we’ve probably all seen unfold. The kids are moving to the court; parents are waiting in the stands for the game to begin. The coach approaches a group of team parents and asks if anyone is willing to be responsible for helping the referees keep time and keep score….A team parent is telling me this story in frustration, shaking her head in confusion.

She continues, “NO ONE offers. Everyone just sits there as if they didn’t hear the coach’s request.” The coach looks around, also in disbelief. After what seems like forever, this parent, declaring her uncertainty about how to do the task, volunteers. She went on to say that this wasn’t the only time such a thing happened. Besides that, she lamented, except for yelling corrections at their kids and angry comments to the ref, the parents rarely showed enthusiasm or what might pass for good sportsmanship.

The mom recalled her own days in high school, attending school ball games, how she and her pals would yell themselves hoarse with support for their teams. She delighted in recalling preparing signs and pep rallies, wearing school colors. “Today,” she lamented, “the kids seem to think such a show of support would be ‘uncool.’ It’s sort of sad, you know?”

We got to talking about why she thought the other parents would not agree to help with scoring. At first she thought it might be because they were being self-centered and didn’t want to have to be distracted from enjoying the game. Then she pondered if it had something to do with not wanting to appear ‘uncool.’ Would entering into something so menial cost you “coolness points?” she wondered aloud. Maybe kids’ I-could-care-less appearance is related to parents’ concern about sort of remaining above it all.

I’ve been thinking since our conversation about a kid’s telling me several years ago how he had to get drunk to have fun. And then, there was the girl who excused her raunchy sexual behavior with, “Whatever! I was drunk!” The scenarios came together in my thinking as I realized that when we cut off our ability to delight in common joys, to be silly like kids (if we’re a kid), or to be a passionate, cheering sports fan, we could well be cutting ourselves away from wholesome, jump-into-the-fun good times.

I was curious as to why the mom had agreed to do the scoring. It was a chance to help the coach; it was a chance to do real aid for the team; it was a chance to take part. She told of learning a lot about the coach that day, about how the various kids on the team reacted to success and to penalties…in a way she’d never noticed before while she’d been chatting with pals on the bleachers. Contrary to being distracted from the game, her engagement enhanced her experience AND gave her lots to chat about with her teen on the way home.

As for me, I’m still tumbling several components around which I think may actually be part of the same issue: parents’ being present at a game but not being willing to take part; kids being too cool to be joyful, enthusiastic; the darkness to which kids go to “have fun,” to “party.” I’m pondering if these are related…. hmmmm

If you have any insights on this, let me know. Meanwhile, take delight, enter zestfully into the world around you! Your kids are watching!

2 thoughts on “Get Off the Bleachers”