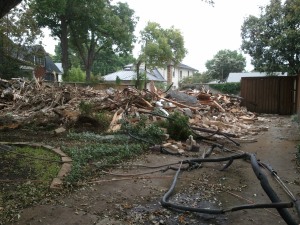 So, everyone has a role model or a hero and one of mine was Frances Geron, a lovely, genteel neighbor who welcomed me to our neighborhood 25 years ago. Beside ironing her sheets, baking her own bread, teaching me to make real lemon curd, Frances mowed her own lawn into her nineties. So, if you drive by and see me mowing, you’ll know it’s her example I’m following.

One day I was at her house chatting and mentioned my book club. As I spoke, she meandered to her kitchen drawer and took out a little booklet. It was stapled together with a construction paper cover, its pages printed in purple mimeograph ink. “This is my book club roster,” Frances began, holding it out for me to see. She opened the first page and I saw names, addresses, phone numbers (like Emerson 3-5103) printed on the right hand side.  Then I noticed that each name had been struck through with a pencil mark and had an obituary taped on the left hand side of the booklet. She read the names aloud; then she looked up and said, “They’re gone now, each one. You know, when you get to be ninety, you better have young friends!”

I got to know Frances pretty well over the years and her friends constituted the “who’s who women ” of early Dallas. They were women who saw injustice and did something about it. They were the ones who knew that kids for all generations needed parks and so they lobbied the city for them. They were women who tied their faith to things happening on the other side of the globe, places they would never see but believed needed good women as advocates. The quirky thing was that Frances never thought of herself or her pals as anything special, just women being responsible for their communities, for their world.

And Frances knew how to be a neighbor. The day after my mom died, I was a mess. About three in the afternoon, the phone rang. It was Frances to invite my seven-year old over for a coke and a game of cards. He was delighted and I was relieved. . . as Frances knew without having to be told. That’s how it is, I guess, when you get older.

The picture at the top of the blog is what’s left of Frances’ home. . . the one she dusted, cleaned, painted, arranged and rearranged. It was bull dozed last week to make way for a new one. My pal, Frances’ across the street neighbor, stopped by to share a moment of mourning. We noted the passing of an age, the passing of a type of women. In her memory,

2 thoughts on “A Message About My Friend, Frances”